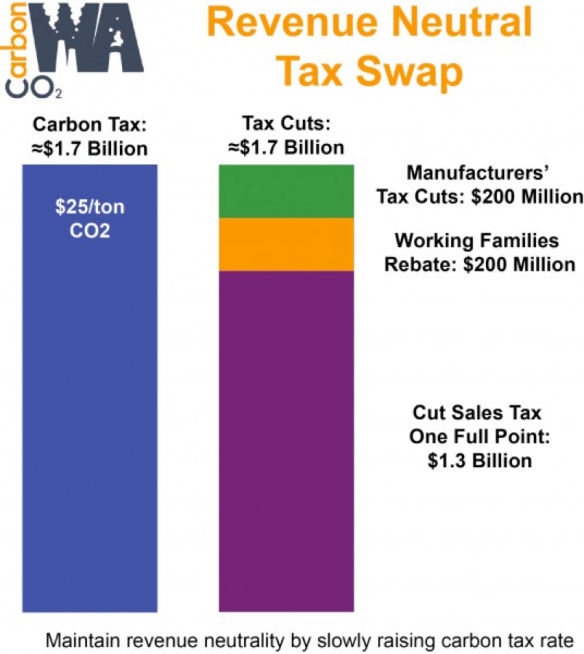 Carbon Washington (CarbonWA) is a citizens’ coalition seeking to enact a statewide carbon tax through a citizens’ initiative.* I-732 would incrementally institute a tax of on all fossil fuels consumed in Washington State. The revenue raised would be used to cut the state sales tax by 1%, to eliminate the Business and Occupations (B&O) tax on manufacturing and to fund the Working Families Rebate (a program the state legislature created in 2008 but never funded).

I-732 is modeled after a carbon tax British Columbia (BC) introduced in 2008, which has received lavish praise from the (pro-corporate) Economist. Prior to its enactment, business warned the carbon tax would increase costs and slow the economy, while the left-leaning New Democratic Party (NDP) warned it would hurt the poor. Both were wrong.

Because the funds raised by BC’s carbon tax are used to cut income taxes (for individuals and businesses), it has been as beneficial for the British Columbia economy as for the environment. In a way, this makes a lot of sense. Taxing people for working and adding wealth to the economy is one of the biggest drags on economic growth there is. It makes a lot more sense to tax activities you want to discourage, such as polluting the atmosphere.

BC also implemented their carbon tax incrementally. The new tax was initially set at C$10 ($10) per tonne of carbon-dioxide emissions, rising by increments of C$5 per year to C$30 in 2012. At present this translate into a 7 cent per litre tax (approximately 25 cents per gallon) on gasoline.

As predicted, the carbon tax has proved as beneficial  for the economy as the environment. Since 2008, per capita fuel consumption in British Columbia has dropped by 16%, which contrasts with an increase of 3% in the rest of Canada. The province now has the lowest income tax rate in Canada and one of the lowest corporate tax rates in North America. Meanwhile per capita GDP continues to outperform other provinces. BC also enjoys lower jobless rates. Thus it’s no wonder it remains extremely popular, supported by 64% of BC residents.

Under I-732, the state will collect a tax on all fossil fuels sold or used within Washington State. This will include fossil fuels sold or used for air travel, motor vehicles boats, and electrical generation. (19% of Washington’s electricity is renewable, generated by hydropower). The tax rate will start at 15 dollars per metric ton of carbon dioxide as of July 1, 2017, increasing to 25 dollars per metric ton as of July 1, 2018, with automatic increases thereafter by 3 ½ percent plus inflation.

This tax swap will take place over two years. B&O tax on manufacturers will be eliminated in full the first year. The state sales tax will be reduced by ½ percentage point per year over two years. The Working Families Rebate will phase in from 15% of the federal EITC (Earned Income Tax Credit) in the first year to 25% of the federal EITC in the second year and beyond.

Carbon Washington executive committee member Yoram Bauman hopes Washington will serve as a model for other states. According to Bauman, CO2 emissions could be halved if all fifty states adopted similar a similar carbon tax.

*I-732 is an initiative to legislature. If Carbon Washington collects enough signatures to qualify, the 2016 legislature has a choice of enacting it into law, enacting substitute legislation or placing it on the 2016 ballot.