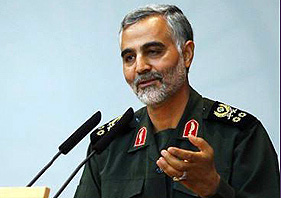 Our Man in Tikrit

According to Reuters, Iraqi security forces and Shi’ite militia fighters (with the support of Canadian special forces and US weapons, trainers and air strikes) are presently engaged in a major assault to retake the Iraqi city of Tikrit from ISIS. Until recently, the western media rarely mentioned the figure commanding these forces.

His name is Major General Qasem Soleimani, and he’s the head of Iran’s Revolutionary Guards’ elite Quds Force. This creates an embarrassing situation for Obama because the US still officially designates Soleimani as a terrorist for his alleged role in a 2011 plot to assassinate the Saudi ambassador to the US

Given all the saber rattling against Iran by congressional Republicans (cheered on by Israeli president Benjamin Netanyahu), the US media has been loathe to acknowledge that Iran has been spearheading the offensive against ISIS in both Iraq and Syria. In Syria, Soleimani is widely credited with helping President Bashar al-Assad turn the tide against rebel forces and recapture key cities and towns.

The US political elite prefers to spoon feed Americans the cartoon version of US foreign policy, in which Americans only go to war against evil doers. For this reason, they have greatly downplayed the role of Soleimani and other Iranian military “advisers” in the battle against ISIS. A recent explosion of interest in General Soleimani on Twitter and Facebook has forced them to come clean.

According to the BBC, this isn’t the first time Soleimani has aided US military efforts in the Middle East. In 2001, he provided military intelligence to the US to support its invasion to overthrow the Taliban in Afghanistan, and in 2007 in participated in US-led talks in Baghdad over the deteriorating situation in Iraq.

As best I can ascertain, Soleimani has been a prominent figure in containing Iraqi sectarian violence since 2011

He has commanded Iranian forces active in the Syrian civil war since the latter half of 2012.