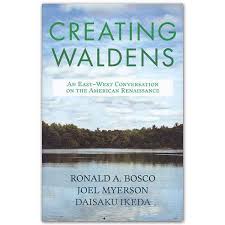 Creating Waldens: An East-West Conversation on the American Renaissance

A Buddhist neighbor loaned me this odd little book. It consists of a series of conversations between 2001 and 2005 between American literature scholars Ronald Bosco and Joel Myerson and Soka schools founder Daisaku Ikeda. The purpose of the conversations was to explore “the poetic heart and reverence for life” in the lives of 18th century American Transcendentalists* Ralph Waldo Emerson, Henry David Thoreau and Walt Whitman; Soka Gakkai International founders Tsunesaburo Makiguchi and Josei Toda and the spirituality of Nichieren Buddhism.

Soka Gakkai International (operating in six countries, including the US) is an alternative system of education that opposes authoritarianism and celebrates the sanctity of life, diversity, intellectual freedom and protection of nature and the environment. Both Makiguchi and Toda were imprisoned in Japan during World War II for opposing Japanese fascism.

For me, the book’s main value was to highlight the shoddy and biased way American history and literature are taught in US high schools. American renaissance? How come no one ever taught us there was an American renaissance? Nor that Emerson and Thoreau were dissidents and social critics – immensely popular ones with a large following.

As part of the American “lyceum movement,”** they gave well-attended public lectures, much as Noam Chomsky, Michael Parenti and other high profile dissidents do today. Besides being fiercely anti-war, both Emerson and Thoreau were extremely critical of the social injustices of early industrial society and the authoritarianism of public education.

Thoreau, in particular, was vehemently opposed to slavery and an active member of the underground railway, which assisted runaway slaves to escape to Canada. In 1846, he publicly manifested his opposition to slavery by refusing to pay his poll tax and was thrown in jail.

His famous essay “On the Duty of Civil Disobedience” inspired Mohandas Gandhi, Martin Luther King, the anti-Nazi resistance, the environmental movement started by Rachel Carson and the pro-democracy movement in cold war Easter Europe. Gandhi would write that he named his “civil disobedience” movement after Thoreau’s essay.

I was also very surprised to learn that both Emerson and Thoreau were heavily influenced by Eastern and Middle Eastern religions and philosophies. Likewise the growing Japanese environmental movement is strongly influenced by Thoreau.

The conversations are facilitated in such a way that they provide a good outline of the lives of Emerson and Thoreau, as well as the ups and downs of their relationship. The former was an early mentor to Thoreau, and Walden Pond*** was on his property.

*Transcendentalism was an American philosophy which taught that people have knowledge about themselves that transcends logic and the senses and can trust themselves to be their own authority on what is right.
**Founded by Joseph Holbrook in 1826, the lyceum movement was an early form of organized adult education popular in the eastern US and Midwest. In addition to Emerson and Thoreau, Frederick Douglass, Daniel Webster, Nathaniel Hawthorne, and Susan B. Anthony were well-known lyceum speakers who traveled from state to state.
**In 1845, Thoreau embarked on an experiment in which he lived in the woods in near total isolation and self-sufficiency for two years, two months and two days. He writes about this in his book 1854 Walden; or, Life in the Woods

12 thoughts on “Stuff I Should Have Learned in High School”