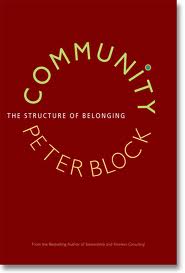 Community: The Structure of Belonging

“How Communities Awaken” is the title of a master class I’m taking through a local Maori social services agency. Our main textbook is Peter Brock’s Community: The Structure of Belonging. We meet every two weeks to do small group work around six “conversations” Brock prescribes as essential to transforming fragmented communities.

Peter Brock is one of a growing number of community strategists dedicated to reducing alienation and apathy by getting people more involved in their communities. In Community: the Structure of Belonging, he maintains that 1) our collective loss of power in contemporary society is a direct result of the breakdown of our communities, 2) the only way to regain this power is to restore citizen engagement in community life and 3) most groups and agencies designed to relive “political suffering” (i.e. poverty, inequality, unemployment and the multiple crises involving housing, education transportation, drug abuse, binge drinking, family violence and at-risk youth) fail because they buy into the patriarchal consumer model imposed on us by wider society.

Brock asserts that the consumer society causes most people to see themselves as passive consumers rather than engaged citizens – that this causes them to see their political and community leaders as delivering a product, with their own role limited to critiquing the product. The purpose of this book is to lay out specific strategies to lift us out of our role as passive consumers of government.

While I partially agree with premises two and three, I totally disagree with premise one. I find to hard to ignore substantial evidence that Wall Street Banksters, the Koch brothers, the Walton family (who own WalMart) and other corporate players have colluded to deliberately strip us of this power. Brock makes absolutely no mention of this. In fact, he dismisses activists who complain about “external” causes of powerlessness as playing the “blame game,” which he describes as a “delightful escape from the unbearable burden of being accountable.”*

I‘m also concerned by his glaring omission of the role the corporate public relations industry plays in constantly bombarding us with fearful, competitive, individualistic and pro-consumption messaging (see The Science of Thought Control).

In my view, this constant barrage of propaganda and disinformation – and the pernicious passivity and apathy resulting from it – is the main obstacle we face to organizing against corporate fascism. That being said, I strongly agree with Brock’s view that the only way to overcome this passivity and apathy is by re-engaging in the community groups and activities – both political and non-political – that our parents and grandparents enjoyed.

I haven’t found New Zealand that much different than the US in this regard. Although there are huge advantages to not living in a military empire (see The Sacrifices of Empire), most New Zealanders seem to be trapped in the same cycle of consumption, debt and overwork. Like Americans, they are depressed, anxious, apathetic and disengaged from community life and the political process. Voluntarism has declined steeply, particularly among young people, and a growing number of Kiwis don’t vote.**

*Turnout remains much better here than in the US. In NZ 77% is considered a poor turnout. In the US 60% is considered a good turnout.
** Brock’s equally dismissive of organized protest and “speaking truth to power,” which he belittles as a “complaint session in evening clothes.” He adds, “Any time we act in reaction, even to evil, we are giving power to what we are in reaction to.” I can agree that it’s more effective to focus on building positive institutions than reacting to negative ones. However we are all trained, as part of our indoctrination, to blame ourselves if for our personal, social and financial failures. The only way I know to get people to quit blaming themselves for the misery they experience in corporate society is to demonstrate that their so-called “personal” problems have a social and political cause.
To be continued with a critique of the specific strategies Brock proposes.

12 thoughts on “How Communities Awaken”