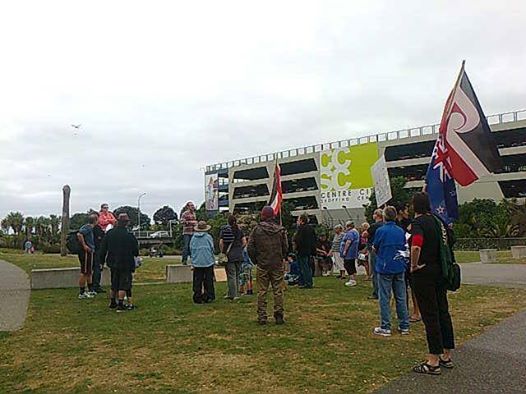 Thousands marched in New Zealand’s nationwide mobilization against the Transpacific Partnership Agreement (TPPA) on March 29, with more than a thousand in Auckland, 400 in Wellington, 200 in Hamilton and Nelson, 125 in Whangarei, 100 each in Tauranga, Napier, Christchurch and Dunedin, 80 in Palmerston North and New Plymouth, and 30 in Invercargill. For a small town like New Plymouth, protests this size are rare, and it got good coverage in the Taranaki Daily Newsl

The TPPA is a free trade agreement which is currently 12 countries, including the US and New Zealand, are currently negotiating behind closed doors. Up to this point, the other 11 countries have caved in to US demands that the text of the TPPA be kept secret until it’s signed. About a month ago the Malaysian government  government announced they would release the text before signing it.
.
According to draft text released by Wikileaks, the new treaty would allow corporations to sue countries in a private tribunal for any laws that interfere with their ability to do business. In New Zealand, this would undermine our access to cheap generic medication, environmental and labor regulations and reduce Internet freedom.

Like NAFTA and the WTO (World Trade Organization), the TPPA only helps corporations – it’s a pretty shitty deal for ordinary Americans.

C’mon Americans we need your support in stopping Obama from turning the global economy over to Monsanto. Go to http://www.exposethetpp.org/ to find out how you can help.