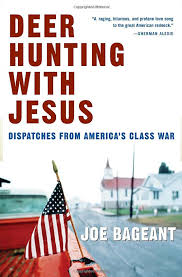 Deer Hunting With Jesus is a graphic account of the abandonment of the white working class by the American left. And how this left the door wide open for right wing fundamentalists to claim their allegiance.

The book’s format is largely autobiographical, as the (now deceased) college-educated journalist Bageant describes his return to his working class roots in Winchester Virginia. He’s dismayed by the deterioration of living standards. The people he grew up with in the fifties and sixties no longer have any job security, nor input into their pay or working conditions, nor employer-sponsored health or workers compensation benefits. Yet instead of being angry with the factory that exploits and demeans them on the daily basis, his former schoolmates have been conditioned to deflect this anger onto educated liberals.

According to Bageant, class warfare is very real in the US. Unfortunately it isn’t between workers and the employers who exploit and demean them. It’s between the educated and uneducated. The goal of Deer Hunting With Jesus is to examine exactly how the white working poor of the rural south and Texas have come to internalize key values of the gangster capitalist class. For example

The Advantages of a Cheap, Unquestioning, Compliant Work Force

The conservative PR specialists who spawned Fox News and talk radio personalities like Glenn Beck and Rush Limbaugh have been extremely skilled in exploiting the fear and ignorance of this demographic. An ignorance, according to Bageant, that Republicans have deliberately created by systematically dismantling the public education system. There’s nothing the corporate elite likes better than a cheap, unquestioning, compliant labor force that pays high rents and medical bills.

According to Bageant, approximately half of all Americans are illiterate, semi-literate or functionally literate. He breaks down the statistics as follows:

Redirecting blue collar anger against liberals has been incredibly easy, as the working poor have far more contact with rich Republican business leaders and slum lords – in small town churches, taverns, and fraternal organizations like the Elks. Liberals feel uncomfortable around them and shun them socially.

Their only contact with liberals is when they go to a doctor, lawyer, social worker, or parent teacher conference. Where they are often talked down to and insulted. Unintentionally of course. Most educated people are unaware that they do this. Based on my own working class background, I can confirm how common this is.

The Scots-Irish Roots of Fundamentalism

The highlights of the book are the chapters in which Bageant discusses the Calvinist Scots-Irish heritage of what he describes as “Middle America” and the major blunder liberal Democrats made in leaping on the gun control wagon.

From the early 1700s, America has always fostered two parallel belief systems, the Yankee liberalism that characterized the New England colonies and the fundamentalist Calvinism that would come to characterize the southern colonies.

Given my personal opposition to gun control, this chapter was my favorite. According to Bageant the only good call the Republicans every made was to side against the gun control lobby. Unlike the Democrats, they understand the deep reverence for guns and meat hunting that is passed down over generations in rural communities. While urban liberals with no experience with guns – and who never have to take the bus alone after a graveyard shift – typically decide they know what’s best for everyone.

This section includes detailed analysis of Congressional Budget Office research about the decline of gun violence and women’s use of firearms to protect themselves against sexual assault.

“The right of citizens to bear arms is just one more guarantee against arbitrary government, one more safeguard against the tyranny which now appears remote in America, but which historically has proved to be always possible.”

Link to Bageant’s website for other great books and articles: http://www.joebageant.com/joe/

7 thoughts on “Deer Hunting with Jesus”